DORTMUND, BALIPOST.com – Barcelona coach Ernesto Valverde said his team had goalkeeper Marc-Andre ter Stegen to thank after they escaped with a 0-0 draw at Borussia Dortmund in their Champions League opener on Tuesday.

“The team overcame a bad moment today, mainly thanks to Ter Stegen,” said Valverde after watching his side survive a second-half onslaught from Dortmund.

In a game in which Lionel Messi made his return from injury, it was Ter Stegen who shone for Barcelona. The German ‘keeper saved a penalty from Dortmund captain Marco Reus and repeatedly frustrated the hosts as his own side struggled.

“It was a difficult game today and I think the result is fair considering what happened,” Ter Stegen told Sky, and commiserated with Germany teammate Reus.

Dortmund and their captain, however, were left to rue several missed chances.

Reus said he felt “rubbish” after his missed penalty and insisted that Dortmund should have won the game.

“We had four or five chances, and if we had taken one of them, we would have won,” he told Sky.

“We said after the draw that we wanted to qualify for the knockout stages. If we continue to play like we did today then there shouldn’t be a problem.”

“We played brilliantly in the second half, and it feels a bit like we have lost two points,” Dortmund defender Mats Hummels told Sky.

Lucien Favre’s side delivered on their pre-match promise to play fearlessly against five-time European champions Barcelona, probing the visitors from the wings and repeatedly finding gaps in the back line.

Reus was denied at point-blank range by Ter Stegen and Jadon Sancho fired the ball over the crossbar shortly before half-time.

The hosts continued to turn the screw after the break, and were rewarded with a penalty when Nelson Semedo tripped Sancho in the box.

Yet Ter Stegen denied countryman Reus again from 12 yards, diving low to his left to beat away his international teammate’s spot-kick.

The Barcelona ‘keeper has now saved four of the six penalties he has faced in the Champions League, and was called upon to stop Reus once more later in the half as Dortmund continued to dominate.

A luckless Reus also fired another good chance well over, while substitute Julian Brandt thundered a long-range effort against the crossbar.

By that point, Messi, who has been out for weeks with a calf injury, had come off the bench to make his first appearance of the season

The 32-year-old came on around the hour mark for Ansu Fati, the 16-year-old prodigy freshly crowned as Barcelona’s youngest ever Champions League debutant. (AFP) 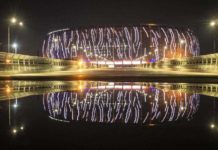