The movie follow-up to the hit TV series about a British upper-class family and their stately home had the lowest budget of the three new releases, at a reported $20 million.

But the film from Focus Features finished a cut above its rivals by taking $31 million in ticket sales over its opening weekend.

With a plot built around a royal visit, the movie was deemed “satisfyingly sumptuous” by the Hollywood Reporter, and “an overstuffed guilty pleasure” by The Washington Post.

Fox’s “Ad Astra” was a distant second at $19 million. Pitt plays an astronaut sent on a dangerous mission at the edge of the solar system.

The three new releases knocked horror flick “IT: Chapter Two” off the top spot after a two-week reign, pushing it down to fourth with $17 million in ticket sales.

The Jennifer Lopez movie “Hustlers” — based on a true story about strippers who plot to steal from their wealthy clients in recession-hit New York — fell from second to fifth place, with $16.8 million.

J-Lo has won plaudits for her role, with Rolling Stone calling her “dazzling,” “electrifying” and Oscar-worthy. (AFP)

Rounding out the weekend’s top 10 were: 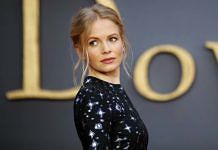