The movie from “Thor: Ragnarok” director Taika Waititi tells the story of a young German boy living during World War Two whose imaginary friend is a make-believe version of Adolf Hitler.

Billed as an “anti-hate satire,” it plots how the child — a Hitler Youth member with a fondness for Nazi uniforms and book-burnings — discovers that his mother (Johansson) is hiding a Jewish girl in their attic.

Johansson said the film’s humor and childish perspective give audiences a new way to grasp “the atrocity of what was really going on at that time.”

She described the script, written by Waititi — who also plays the imaginary Hitler — as a “perfect jewel.”

The New Zealand-born director, who is of Maori and Jewish descent, said the release of the film was timely in today’s polarized political climate.

“Now we’re seeing all those little pockets of hate groups and seeing these patterns that were happening in the ’30s happening again,” he said.

“And for me, now more than ever, I think it’s important that we keep addressing that stuff and revisiting these stories.”

Johansson, the world’s highest paid actress, also appeared on the red carpet for “Marriage Story,” a drama about a divorcing couple in which she stars opposite Adam Driver.

The Netflix movie received rave reviews last week at its world premiere in Venice — the same week that director Martin Scorsese chose to praise Driver as “one of the best, if not the best, actors of his generation.”

Driver, best known to wider audiences as the villainous Kylo Ren in “Star Wars,” has been widely tipped for Oscar glory for his portrayal of a narcissistic New York theater director. (AFP) 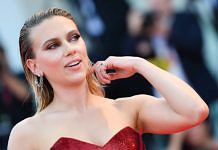 Johansson says she would work with Woody Allen ‘anytime’