LOS ANGELES, BALIPOST.com – Los Angeles prosecutors charged Harvey Weinstein on Monday with sexually assaulting two women on successive nights during Oscars week in 2013. This charged bringing the new case against the disgraced Hollywood mogul on the eve of jury selection for his New York trial.

As reported by Associated Press, the case, brought by a task force set up by the Los Angeles County district attorney to investigate sex-crime allegations against entertainment figures, now puts Weinstein in deep legal peril on both coasts, where he built a career as the one of the most powerful — and feared — figures in show business before a barrage of accusations from more than 75 women led to his downfall and ignited the #MeToo movement.

Weinstein, 67, was charged with raping a woman at a Los Angeles hotel on Feb. 18, 2013, after pushing his way inside her room, then sexually assaulting a woman in a Beverly Hills hotel suite the next night. He could get up to 28 years in prison on charges of forcible rape, forcible oral copulation, sexual penetration by use of force and sexual battery. “We see you, we hear you and we believe you”’ District Attorney Jackie Lacey said in announcing the charges, addressing herself to the studio boss’s accusers.

Los Angeles Police Chief Michel Moore said the charges open the “next chapter” for a man “who has gotten away with too much for too long,” while Beverly Hills Chief Sandra Spagnoli called the cases “horrendous crimes perpetrated by a sexual predator.”

Lawyers for Weinstein had no immediate comment on the new charges, though he has repeatedly denied any wrongdoing.

Jury selection is set to begin Tuesday in the New York case, in which Weinstein is charged with raping a woman in a New York City hotel room in 2013 and forcibly performing a sex act on another woman in 2006. He has said any sexual activity was consensual.

If convicted of the most serious charges, predatory sexual assault, he faces a mandatory life sentence. “The walls of justice are closing in on Harvey Weinstein. He is now being prosecuted both in New York and Los Angeles,” celebrity attorney Gloria Allred exulted in a statement. Allred represents one of the alleged victims in the New York case as well as actress Annabella Sciorra, who is scheduled to testify against Weinstein in New York. (kmb/balipost) 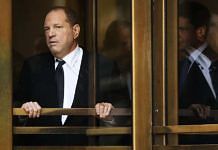