The 21-year-old, who won his maiden GP in Belgium last weekend, was exultant as a vast army of Ferrari fans in an estimated crowd of more than 150,000 celebrated deliriously.

“I think if you have to win one Grand Prix with Ferrari, it’s the Italian Grand Prix,” said an exhausted Leclerc after winning the 90th edition of the GP for the Italian team in their 90th year.

“I came here with my first win and to win my second one here straight away with all the fans is just unbelievable.

“I don’t have the words to describe this. I have never imagined it, I’ve never dreamed of something like this –- it is above everything I have imagined in my career and in my racing life to have a podium like this.”

Leclerc came home narrowly ahead of second-placed Valtteri Bottas and his Mercedes team-mate Lewis Hamilton, who pursued the victory for most of the race until his tyres let him down.

Hamilton apologised to Mercedes and said his tyres “had gone off the cliff” but the defending five-time champion still has a healthy lead in the drivers championship, 63 points ahead of his Mercedes team-mate Bottas.

Leclerc’s Ferrari team-mate Sebastian Vettel endured a torrid and disappointing day, finishing 13th after spinning off and taking a penalty for rejoining in a dangerous fashion. 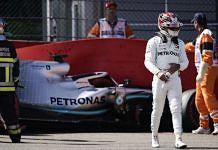