English > From reformer to hardliner: Putin’s 20 years on the global stage

The departing Yeltsin was casting around for a successor and few could have predicted that two decades later Putin would still be ruling Russia, having taken on a dominant role in world affairs.

But the anniversary comes at a time of uncertainty in the leader’s reign.

Putin’s approval ratings remain at a level most Western leaders would envy but they have taken a hit from a stalling economy and declining living standards.

A protest movement in Moscow has meanwhile seen thousands arrested in recent weeks — the largest crackdown since a wave of demonstrations against Putin returning to the Kremlin in 2012 after another spell as prime minister.

The 66-year-old is meanwhile facing a succession drama of his own.

This is his last term in office according to the Russian constitution but — after stamping out the competition and taking control of most of the media — there is no obvious figure to replace him.

Analysts say it is unlikely that Russia’s longest-serving leader since Joseph Stalin will give up power completely when his current term ends in 2024.

“Russia, despite its poverty and problems with criminality, was still a democratic, liberal country,” said prominent journalist Nikolai Svanidze, who often interviewed Putin at the start of his time in the Kremlin.

“After 20 years in power, he’s not limited in any way — he’s practically a sultan,” Svanidze said.

Political analyst Konstantin Kalachev said Putin started out as a liberal who was ready to work with the West but over time took a more conservative and hostile stance. (AFP) 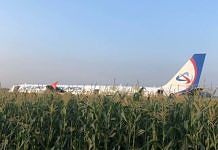