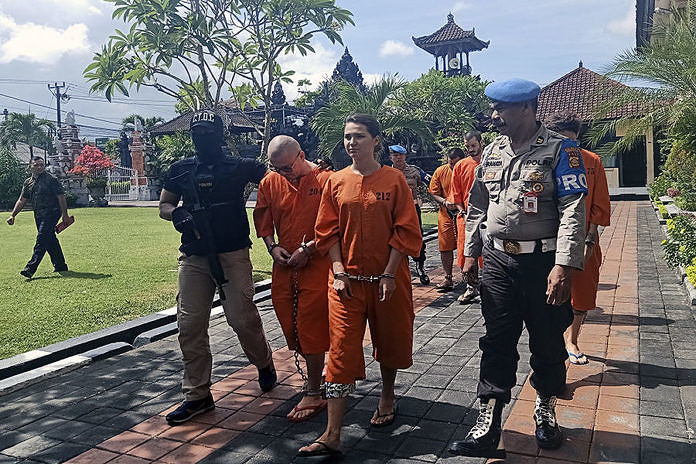 DENPASAR, BALIPOST.com — Denpasar Police Narcotics Investigation Team and CTOC Taskforce of Bali Police arrested 5 foreigners on Friday (May 24) in North Kuta. The perpetrators arrested are Nikita, 33, from Russia, Maria, 31, from Russia, Ian, 31, from the United States, Laura, 33, from Spain and Juan, 37, from Spain. The evidence confiscated includes 20.18 grams of cocaine and 44.14 grams of marijuana. Allegedly, this plot is controlled by an international drug cartel because the cocaine must be imported.

“Cartel of the above mentioned perpetrators are still being sought after. They are in the same syndicate. Possibly, the international syndicate has entered Bali. Surely, the targets are foreign tourists vacationing in Bali,” said the source on Sunday (Jun. 2).
Meanwhile, Chief of the Denpasar Police, Ruddi Setiawan, accompanied by Deputy Chief Benny Pramono stated on Friday (May 31) the perpetrators had a syndicate of dealers for cocaine and marijuana. “Even though they are foreign tourists, we will chain them if getting involved in drugs. If resisting, we will take action firmly. The perpetrators have been in Bali for a long time because they have restaurants and become yoga instructors,” said Chief Ruddi.
Disclosure of the cases, he said, originated from the information of the people in the Kuta, North Kuta and Seminyak areas, where foreign tourists often circulate or carry out cocaine-type drug transactions. Armed with the information, the team leader Putu Budi Artama along with his personnel conducted an investigation.
On Monday (May 20) at 13:30, police arrested Nikita on Jalan Tegal Cepuk, Kerobokan, North Kuta, Badung. The officers developed the case and finally arrested a Russian woman, Maria.
Meanwhile on Thursday (May 23) at 20:00, police arrested an American tourist, Ian, on Jalan Pengubengan, North Kuta. The case was continuously developed, where the officers the arrested Laura from Spain on Jalan Pengubengan Kauh, Kerobokan, North Kuta, Badung. The next day, the suspect Juan was arrested on Jalan Bumbak Dauh, Kerobokan, North Kuta.
“This imported narcotic (cocaine) is sold to other foreign tourists. Indeed they are specifically targeting foreigners,” said Ruddi, accompanied by Chief of Narcotic Investigation Unit, Aris Purwanto.
Division Head of the Legal Services of the National Anti-Narcotics Movement of Bali Chapter, Made Somya Putra, said there are several things that underlie foreigners entering Indonesia as syndicates such as Indonesia is a big drug market, weak in law enforcement, having the absence of firm legal sanctions, and many people can be tricked into using this illicit goods. “This weakness is exploited, so the syndicate of drug dealers from overseas continues to enter Indonesia,” he said.
He hoped the law enforcement officers should impose severe and maximum penalties on perpetrators of drug crimes. In addition, the efforts to make the community drug-clean having been carried out so far need to be maximized. (Yudi Karnaedi/balipost)